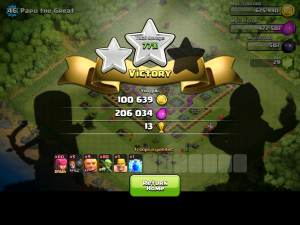 The most important thing to remember is to choose your attack carefully!

This is my first tip for Clash of Clans, an iOS game (free to install an play with optional in-game purchases).
When designing your base, if you are worried about trophies, there’s something fundamentally wrong with this design: 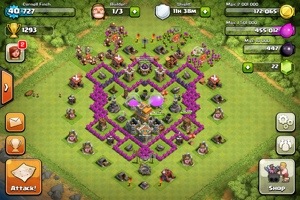 It’s not a major thing, but an attacker managed to take 4 trophies (and get me a 12 hour shield) without even breaking through a wall.
How? He deposited 180 archers around the outside of the base and took out everything outside the wall.
I had positioned all the collectors and builders hits etc thinking it pushes the spawn point further away from the walls and stuff I wanted to protect. Unfortunately this also had the effect of pushing everything outside the range of my canons, archer towers and mortars.
Thankfully this is easily fixed by moving everything back against the outside wall, bringing them under the protection of the defences. 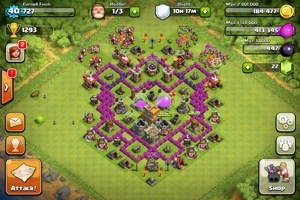 Baddabing baddaboom, thirty seconds work and the job’s a goodun!
This will not stand up to the dedicated attacker with dragons, pekkas and the like but it’s a pretty bloody good setup for most attackers.