Anyone out there who hears “build” when it comes to PC either thinks this an overly complicated process and an expensive one. Quick tip: it’s not. If you do your homework and choose the right parts well by trimming down the components to the essentials, it’s possible to piece together a budget build that has excellent performance for the latest video game releases. On the next guide, we are aiming to put together a build that runs in the $500 to $700 range at most. This PC should be easy to expand in the future as you look to enhance your hardware. 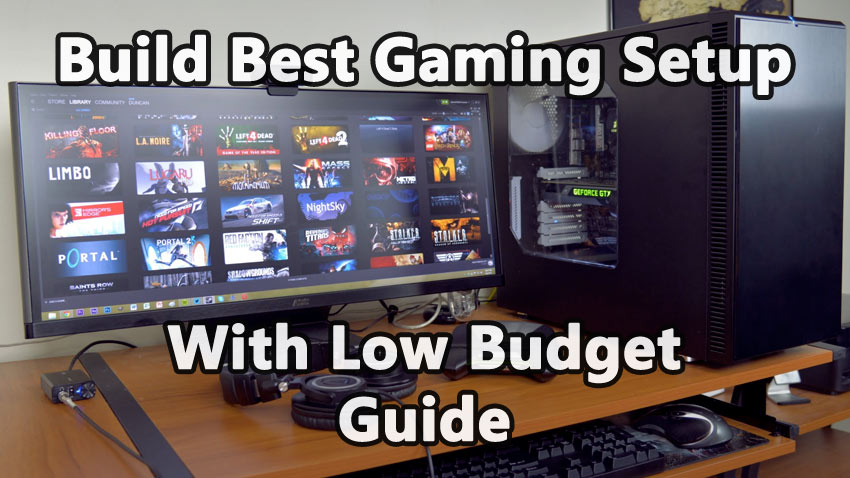 A dream build for PC gaming it’s a challenge on its own, almost everyone recommends dipping your toes with high-end components. When money is a problem, but there is room to indulge in your hobbies you can bring yourself to assemble the right arts and expect it to perform as well as anything built using state of the art technology. It’s true that less money can mean less power, that’s why in our guide we have done some research to hit our budget properly. Before we start let’s get out of the way what we have ditched concerning conventional components: we are not using optical means to handle data, and we are not using a large HDD.

What you are Getting and How it Works

With this build, you will see a lot of low-cost components. This doesn’t mean we are picking shady parts. You will see some big names when it comes to the brands making up this build. All the parts that are deemed essential to gaming performance are the ones that have the most study that on our end, others like the case, the power supply unit, the storage, and memory RAM are for your consideration. Bear in mind that this build is not a dead-end system. The CPU is on the low end of the spectrum, but our choice of the motherboard can work with any modern processor in the market right now, so there is a vast room for improvement. If you don’t feel like replacing the CPU, you can step up the game of the GPU and go for high-end graphics cards down the road to enhance the visuals of your gaming to the next level. Remember: this budget build is conceived to run games at 1080p on maximum settings. 4K is out of the question, so please don’t try it.

Intel Core i3-8100
The prices of the Intel processors have finally lowered to make one of their most popular quad-core processors as a budget option. Most of this is thanks to AMD’s Ryzen-3 processors and Ryzen-3 APU. The i3-8100 has the same type of performance than an old Core i5-7400, the main difference being the increased speed on the internal clock of the processor as a bonus. Gamers have been choosing Intel’s quad-core CPUs for some time now, so it’s great news that Core i5 parts are running now on six cores, (even if most of them just need 4-core parts to run properly). The best advice we can offer when it comes to this processor is to be careful if you are running multiple tasks as you play. If you like to Twitch stream or use Discord, you will have a few performance issues. (Estimated price: $115)

Zotac GTX 1050-Ti Mini
The GTX 1050 Ti is the for our money one of the best budget GPU units that cost no more than $100 right now. This graphics card provides 1080p x 60fps resolution which is medium settings on games released on 2018. Older games will get a huge boost out of it since most of them will look at their best. Beware that this card if you plan to try VR gaming. It doesn’t handle well the high resolutions demanded by that type of hardware. If you need to compare to something existing in the market right now, this GPU is akin to the one found in the PS4-Pro. This card offers a lot of bang for your buck. The PNY’s version of the 1050-Ti is also minimal, but it doesn’t lose capacity or shows performance issues at any moment. It fits really well in smaller cases if you need to opt for one. (Estimated Price: $100)

8GB DDR4-2400
This is the one department where you have probably way too many choices to pick a single brand since single 16GB RAM sticks have become available, they have driven down the final prices of any DDR4 a great deal. Since we are centered on a budget build, an 8GB memory stick is fine for your gaming purposes. They are not expensive, and you still get good performance speed while keeping on budget. Please pay attention in this regard: while a choice of generic DDR4 is not ideal, we’re not going with a specific brand of DDR4 memory because their prices are very diverse. Our recommendation of a basic set of 8GB DDR4-2400 kit will cost no more than $60, but if you do some digging you may find DDR4-2666 or DDR4-3000 that will cost as much, so it could be a good idea to spend some time hunting one of these. (Estimated Price: $60)

Gigabyte H310M Micro ATX Motherboard
Since we are a doing our best to create a budget build, we can’t afford to have fancy features on our motherboard such like overclocking. While this could be an issue for tech-savvy gamers is not a real reason for concern if you are not a hardcore elitists, after all the best-rated features of motherboards can only be accessed by high-end components. The Gigabyte H310M is our choice here, this entry-level motherboard is priced at $50, and it has everything to administer the tasks of your other components. Keep in mind that motherboards don’t affect gaming performance, and if you eventually get high-end parts, you can replace it. (Estimated Price: $50)

Crucial MX500 250GB
The size of your storage device is not a real reason for concern with this particular build. What you are aiming for is functionality, and an SDD might be just up your alley, the reason is simple: the speed difference between SSD and HDD when you boot your system is noticeable, and the performance is greatly improved. The current cost of a moderate SSD of 250GB that has room for the OS and a few games should be of $75. Our choice for this build is the Crucial’s MX500 SSD since is one of the fastest SATA SSDs available in the market. If you know about computers, you probably wonder why we are not going with M.2 options. When you see the prices on those, you will understand our choice from a technical point of view. (Estimated Price: $75)

EVGA BR 450W 80+ Bronze-PSU
EVGA is a trendy choice among budgets builds for offering lasting products in the graphics department and power supplies options. Our personal choice for this build is the EVGA BR 450W PSU. Is not a modular piece and is a little bit tricky to build around it, but it will outlast every component of the PC and power up the build for a long time. With a price tag of $25 doesn’t get any cheaper than this, bear in mind that going lower means you using generic products and bad power supply leads to a useless PC or a fire hazard. (Estimated Price: $25)

Cooler Master MasterBox Q300L
A first impression of the MasterBox Q300L can be misleading since it doesn’t look like a budget computer case at all. The price tag of $40 reveals that it is one that happens to be really well made. The MasterBox comes equipped with a bunch of fans in the overall frame. It has great airflow, a clean aesthetic. You budget build will never look better!